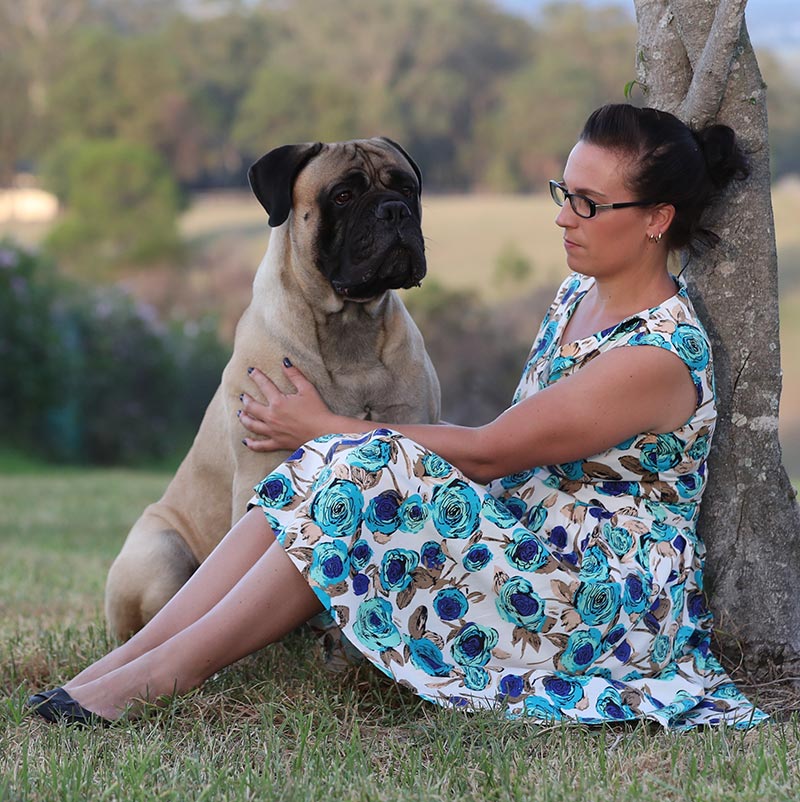 Welcome to Gameguard Bullmastiffs, Australia. While we are not new to the breed we may be new to many of you from interstate or overseas, so let us introduce ourselves. Gameguard is a select kennel run by Glenn and Brooke Sparham. 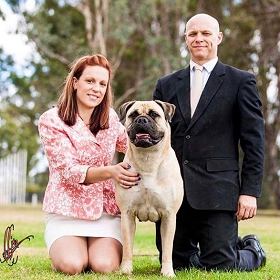 Above: Lilly with Brooke and Glenn after winning BISS at the 2014 National Specialty.

We have specialised in Bullmastiffs since our humble beginnings in 1987 when my father purchased a bitch named Bullpower Aphrodite and she soon gained her championship title. The breed was relatively new in the state of NSW back then and quality Bullmastiffs were few and far between. However our girl "Tara", was out of the top bitch Ch. Vanetta Cindy and by a new English import Ch. Maxtoke Norton.

We had some minor success and were hooked on our new hobby! I read every book, article and newsletter about the breed and was always eager to listen to those who had a tale to tell about a Bullmastiff. Upon the purchase of our first Bullmastiff book we found that the fantastic male pictured on the back cover was none other than the famous U.K. Champion Graecia Centaur. As far as I was concerned he was the benchmark to aim for. "Ben" as he was known, also happened to be my bitch's grandfather. Steve Nicholas, my earliest mentor, who imported Ch. Maxtoke Norton, had many photos and videos of dogs he saw in the United Kingdom. Through these videos I was introduced to more famous "Graecia" Bullmastiffs owned by Alan and Mave Rostron. 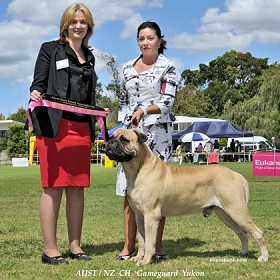 As far as I was concerned these dogs had a consistent quality that many others lacked. A few years later the Rostrons were invited to judge at the NSW Bullmastiff club show. Soon after, they became our mentors and great friends and we would devour every bit of information they would send "down under".

After a few mishaps and general bad luck our breeding program had hit a dead end. I quickly learnt the hard way from my mistakes and was determined to be better prepared. I decided this meant starting again with the best possible stock we could purchase. An opportunity arose and we imported a bitch from the Rostrons named Little Treasure of Graecia (Imp. U.K.) and she was soon titled to Champion. More imports were to follow with a total of four bitches, two of which were in whelp, two mature males and frozen semen. We have since gone on to import semen from America, Sweden, Germany and Scotland. 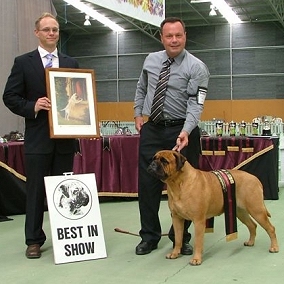 Above: Glenn Sparham awarding Best in Show in New Zealand.

We have now achieved a small but competitive kennel and hope to do justice to the ancestors of our stock, from Eng. Ch. Graecia Centaur to his son Eng. Ch. Saturn of Graecia and grandson Eng. Ch. Graecia Mercury. Together with the great grandson Eng. Ch. Brookmead Marcus of Graecia, this line has achieved the record of 4 straight generations of Crufts Best of Breed winners. With our Best in specialty Show and Best in Show all breeds winners we hope to keep the tradition alive. Our next challenge is to, as they say in Star Trek, ………… to boldly go where no man has gone before!

Glenn and Brooke are internationally approved championship show level judges for Bullmastiffs as well as all other breeds in the Utility Group (in Australia this contains the Bullmastiff).

When choosing a breeder from which to purchase a puppy it is always best to know what goals they hope to achieve in their breeding program. It is with this in mind that I have written the following:

My absolute aim is to raise quality Bullmastiffs through carefully planned matings, health screening and strict selection criteria. I not only want to produce Bullmastiffs as close to the standard as possible but I also wish my dogs to be distinguished by producing consistent stock in turn. I believe these results have come through with the compliment of smart line-breeding and well-chosen outcrosses.

We always endeavour to use the best dogs from around the world, incurring great expense to ensure a viable gene pool for the long term. So far we have imported one male, four bitches (two of which were in whelp) as well as frozen semen from the country of origin. We have used dogs from all across the country to ensure our bitches are mated with the most suitable sires available, no mean feat when you consider Australia is as large as Eastern and Western Europe put together. 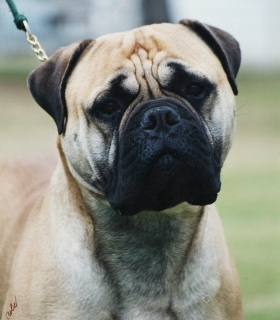 Our approach to controlling genetic and congenital issues is sensible. We x-ray all hips and elbows and aim to adopt new health screening processes as they become viable. I believe the breeder's challenge is to curb genetic problems without losing site of the whole animal in the process, neither emphasising one element that may be detrimental to another.

I believe the Bullmastiff must be a balanced animal having the classic hallmark head, sound structured body, powerful, efficient movement and a firm fun-loving nature. We follow the Standard of the country of origin (which is also Australia's) and don't succumb to international fads that may change the breed.

Our long-term viability is assured with our intention of establishing a frozen semen bank from the top dogs from around the globe. It will incorporate several dogs that compliment our breeding program and give us flexibility for the future. I believe it will be the first of its kind and scale for the breed in this country.

Though we only breed to keep something for ourselves we also allow our top stock to go to the right homes to ensure all can benefit from our hard work. We welcome any enquiries and will openly help with any breed-related questions.